Yocan Orbit Concentrate Pen. With a coil-less quartz cup at the helm, featuring a Top Vertex Airflow System and two Quartz Balls to depict the ultimate aesthetics of vapour while transmitting even heating. Coupled with a 1700mAh battery which can offer 3 voltage levels, the Yocan Orbit is ready to show its madness. 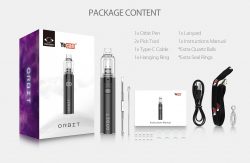 Call Now
We use cookies to ensure that we give you the best experience on our website. If you continue to use this site we will assume that you are happy with it.Ok